The outlook for the world economy remains bleak. The COVID-19 pandemic has evolved into the biggest health crisis in 100 years, and the draconian measures to curb the spread of infection have had enormous financial costs. While economic growth will soon be on the rise again as locked-down communities gradually reopen, it will likely be a long time before the economic scars have fully healed.

The Nordic economies have also been hit hard by the containment measures and global recession. However, thanks to good public finances, they are relatively well equipped to deal with the long-term consequences of the corona crisis.

The Swedish economy is slowing down at an unprecedented pace for modern times. While the downturn is widespread across sectors, the plunge in exports accounts for most of the decline in GDP. However, the domestic economy is showing some resilience, and household consumption will recover the fastest. While unemployment will peak above 10% this year, the labour market situation would have been much worse without policy measures. Inflation is fluctuating due to energy prices, while underlying cost pressures will remain low during the coming years. The Riksbank is expected to expand the QE programme but keep the repo rate unchanged at 0.0%.

The Finnish economy has suffered a severe collapse due to the corona crisis, with the deepest drop occurring in household consumption. According to Nordea’s card data, payment volumes were down by around 25% at the end of March but have recovered with the partial easing of the lockdown. The collapse of demand and increased uncertainty will hurt corporate investment, and the challenges for exporters and manufacturing companies are expected to worsen in the autumn when their order books are cleared.

The coronavirus outbreak has also hit the Danish economy hard. The downturn will likely bottom in Q2, and the gradual reopening of the economy will pave the way for higher activity in the autumn. The expected drop in GDP this year will likely be around the same size as during the financial crisis in 2009. But unlike then, the Danish economy was not characterised by major imbalances this time when the corona crisis broke out. This makes the Danish economy much more resilient – compared to before and relative to many other countries.Norway has, like most other economies, been severely affected by the measures to contain the coronavirus. But the worst is over, and the recovery has begun. It is still very uncertain how long it will take. Low oil prices pose an extra challenge for Norway, but the economy has become less oil dependent. At the same time, there is room to stimulate the economy both through fiscal and monetary policy. The interest rate, which will remain historically low for a long time,  is a powerful tool, which will help underpin housing prices and maintain overall household income, despite rising unemployment. 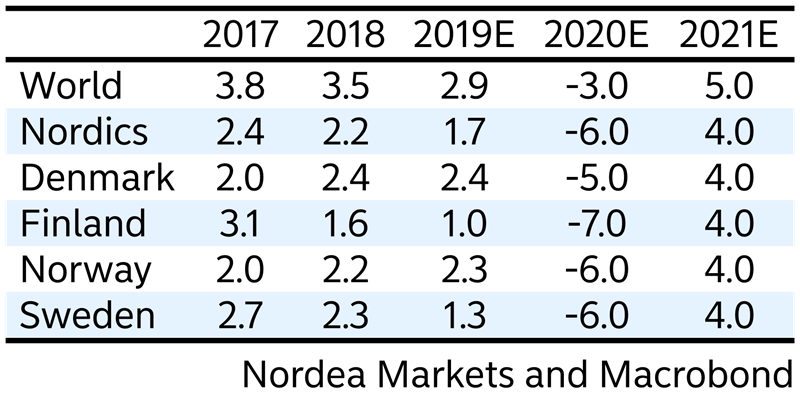 Nordea is a Nordic universal bank. We are helping our customers realise their dreams and aspirations – and we have done that for 200 years. We want to make a real difference for our customers and the communities where we operate – by being a strong and personal financial partner. The Nordea share is listed on the Nasdaq Helsinki, Nasdaq Copenhagen and Nasdaq Stockholm exchanges. Read more about us on nordea.com